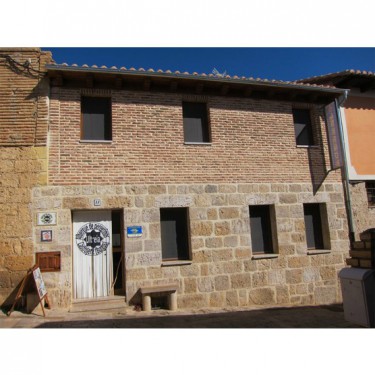 We have a winery. We explained to be made to serve, making it work in the end, tasting herbs pomace home.

In the garden, fountain for the feet and legs, a nice massage cold water.In one of the most typical and genuine peoples camino de Santiago this shelter is newly built and opened in March 2014. A new concept of hospitability adapted to new times and new pilgrims from the very conception of the place.

It is managed by the people road lovers and pilgrims before hostel receptionists will treat with full complicity and friendliness to bicyclists and bicycles.

The double and twin rooms, 48 € including breakfast.

Upper floor:
Three bedrooms, two double and one twin. All rooms with bath and TV.
Both will be connected by an internal staircase.

The villa Castrojeriz not fail to impress by its large number of monuments, its churches, convents and even castles. In the streets you can feel the essence of time and get lost in alleys where we will feel transported to another time.
Castrojeriz we provide all the services needed to regain strength, shops, bars, pharmacy, ATMs ........