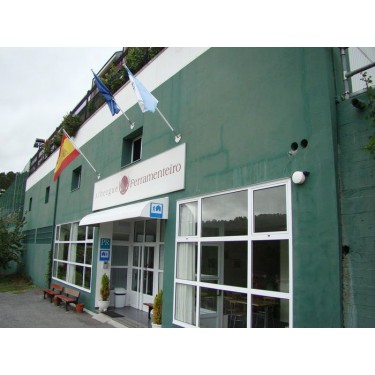 OPEN FROM APRIL TO OCTOBER

The Ferramenteiro Hostel is located in the banks of the River Minho at Villa Portomarín.
Have recently opened a modern and adapted to the needs of the traveler, making your stay in the villa as pleasant as possible.

Your efforts deserve a break

We offer all services for your best rest:

Portomarín is nailed on the right bank of the River Minho.

The old city consists of two quarters, San Nicolas and San Pedro, is submerged in the reservoir of Belesar.

Portomarín was an important stopover in the Middle Ages with a large bridge and hospital, everything was under water Minho.

The great fortress-church of St. Nicholas, built by monks-knights of the Order of St. John of Jerusalem in the twelfth century, was dismantled stone by stone to be rebuilt in the plaza of the new settlement.

For its monumentality, rich and sumptuous sculptural elements, is one of the most interesting examples of Romanesque Lugo.

The Romanesque facade of the church of San Pedro, who also moved to the edge of town (next to the Manor of the seventeenth Berbetoros) is beautifully crafted.

The Chapel of the Virgen de las Nieves is currently mounted on a bow of the old medieval bridge.

Portomarín has about 2,200 inhabitants and in it you can find grocery stores, bakeries and some mesons.