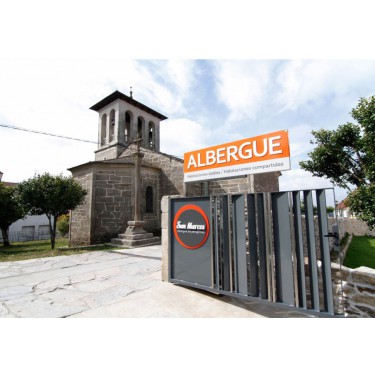 OPEN FROM APRIL TO OCTOBER

New building located on the Camino de Santiago; right next to the Romanesque church of San Tirso in the same town of Palas de Rei.

In San Marcos offer a new concept and design more intimate and friendly than conventional lodging accommodations. You will find quality services and intstalaciones with the characteristics of a *** hotel but at the price of a hostel.

Our goal is to make the pilgrim your stay as pleasant and comfortable as possible for rest and recovered to take the road again.

Free wifi area around the hostel.

Outlets in all rooms available for guests.

Kit disposable bed sheet, fitted sheet and pillowcase with one blanket per guest.

Individual lockers in the rooms to keep personal belongings locked.

The story of Palas de Rey comes closely linked to the military culture, still retaining many archaeological remains (dolmens, dolmens and forts) witnessed a remote settlement. According to tradition, the town hall is named "pallatium regis" the palace of the Visigoth king Witiza, who would reign between 702 and 710. Palas, Witiza have killed the Duke of Galicia, Favila, father of Don Pelayo.

The Romanesque style came by the way of Santiago, leaving their mark on the religious architecture, highlighting the church of Vilar de Donas, one of the main leaders of the Galician Romanesque, 1931 declared a historic monument. His murals are one of the most important and best preserved in Galicia sets.

This was on the track "Lucus Augusti", and by the sixth century belonging to the County of "Ulliensis" is observed, with the Middle Ages a period of prosperity for the town, largely thanks to the Camino de Santiago. The "Codex Calixtino" Palas quoted as mandatory stop for pilgrims to meet the latter stages of the pilgrimage route.

The municipality of Palas de Rey has a large artistic heritage that reflects the noble past of these lands, as remains of fortresses, towers, castles and several manors and noble houses. Among the most important constructions are: the old house-tower Filgueira; house-tower Fontecuberta; Pazo de Laia that preserves the coat of arms of the counts of Lock, from whose lineage would founder Pambre; Ulloa's house, where Saavedra, Montenegros, Gayosos, the Deza, identify with their arms and family crests; Pazo Mariñao; the ancient fortress of Castro de Seixas in the parish of Whiting, from which this known Galician lineage; Pazo de Pacheco, and finally Pambre Castle, erected by Don Gonzalo Ozores de Ulloa was 1375 fort, which resisted the irmandiña revolt in 1467, becoming one of the best examples of military architecture of Galicia.

Palas, protagonist also in the second Carlist War, was one of the few municipalities that won the uprising in 1846, becoming a Revolutionary Junta. The lands of Palas de Rei served as inspiration to writers like Lopez Ferreiro, Álvaro Cunqueiro or Emilia Pardo Bazán.