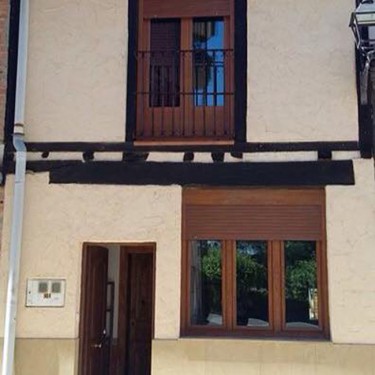 OPEN ALL YEAR. (Off season for groups on reservation)

Grañón is a municipality in the autonomous community of La Rioja (Spain). It is the last village in the Camino de Santiago in La Rioja. It belongs to the region of Santo Domingo de la Calzada and jurisdictional term of Haro. Its inhabitants, grañoneros and grañoneras, live off agriculture and livestock primarily, so most young people end up abandoning the people to look for other livelihoods in the capital, Logroño.

Completely renovated, opened on July 25, 2015.
The person responsible for handling the hostel is called, Manu Pérez. And reserve plaza.

This hostel has supported sleeps 10. With two rooms, one for 6 and one of 4. They are all bunk.

The temple is located in the center of the population, particularly in the Granary Square. It has a nave of three sections, octagonal presbytery and head of three cloth. At the end of the head is the sacristy, which extends southward. The tower consists of two bodies of chairs. Regarding the covers, there are three: one half point at the foot of the head, another formed by six pointed archivolts and a third, blinded. The building dates from the fifteenth and sixteenth centuries, though the new sacristy and the tower are later.

Ermita of the Jews.

It is a covered plateresco cruise in antiquity served to guide walkers. Therefore it is located at the exit of the town, at the junction of roads Villarta-Quintana, Morales and Body. It houses a cross that sits on a Tuscan column that you can read the inscription: "And he made Bicente benefited cleric San Juan de Grañon".